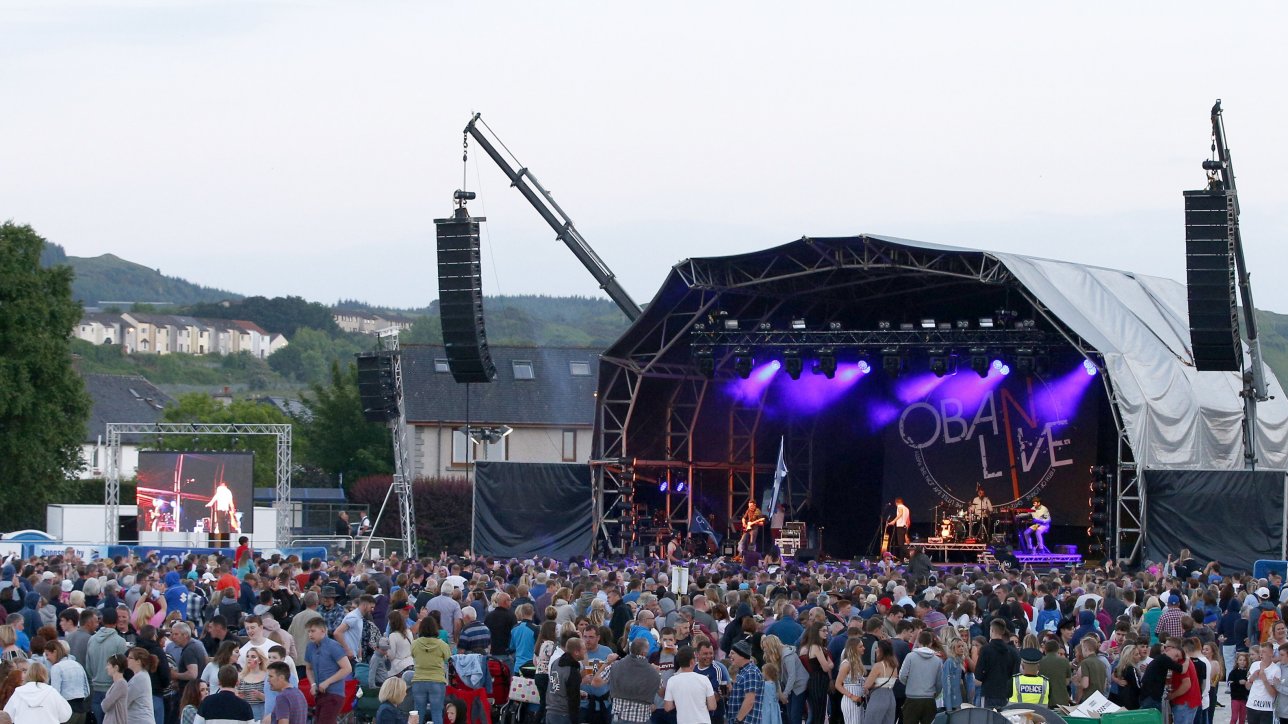 Oban Live, Argyll’s biggest outdoor live music event, injected over £1.4million to the local economy this year, according to a recent economic impact survey. The positive figure shows a 3% rise in impact from last year, bringing significant investment for the town over a non-holiday weekend.

The 2018 event, in its third year running, was hailed a success, entertaining just over 8,000 attendees with a 7% increase in ticket sales compared to last year.  Thousands flocked to Oban’s Mossfield Stadium, which is transformed into a stadium-sized concert arena for the event, to catch a mixture of highly acclaimed trad, pop and rock stars including Skerryvore, Skipinnish, Tide Lines, Hermitage Green and Peatbog Faeries. The event has been shortlisted for Best Cultural Event at this year’s Highland and Islands Tourism Awards in November. Winners from each category at the awards ceremony will automatically be put forward as a regional finalist in the National Scottish Thistle Awards scheme.

A rise in visitors from elsewhere in Scotland shows that visitors are increasingly travelling to Oban for Oban Live from further afield. 63% were visiting the event from outwith the local area. 99% of survey respondents said they were in the area as a direct result of the event. 8% were visiting Oban for the first time. More than 18% stayed for four or more nights. Visitors each spent on average £333 on accommodation, food and drink whilst in Oban, with spend in the town at its highest in bars, restaurants and cafes.

A Fringe Partner programme was introduced for the Oban Live 2018 event which encouraged local businesses to hold an event or special offer over the weekend. The 2018 Fringe Programme, in association with BID4Oban and The Oban Times, was packed with live music events across the town before and after Oban Live and special offers included money off tourist activities, meals and shop items.

Andrew Spence, Chief Executive for BID4Oban Ltd, a key partner for Oban Live, said: “BID4Oban is delighted with the latest economic impact figures that have recently been released. They are testament to how our organisation can work closely with the organisers of Oban Live. A huge amount of work goes on in the background with both organisations to ensure an excellent experience for both festival goers and the business community. We want to see this event go from strength to strength and in particular grow the fringe opportunities throughout the event. BID4Oban are looking forward to supporting Oban Live during 2019.”

Naomi Hoolahan, Event Director for Oban Live said: “Since day one of Oban Live, our main aim has always been to bring positive economic benefits to the town, so the news of a rise in visitor spend is very encouraging. Hosting thousands of visitors and building Oban Live to the highest standard is a costly and time consuming job that can’t be done without the continued support from our partners, sponsors, local businesses and the local community. A massive thank you to all those involved and we look forward to working with you on Oban Live 2019.”

Plans for the 2019 event, which takes place at Mossfield Stadium on June 7 & 8, have begun and ticket announcements are expected to be made in the coming weeks.