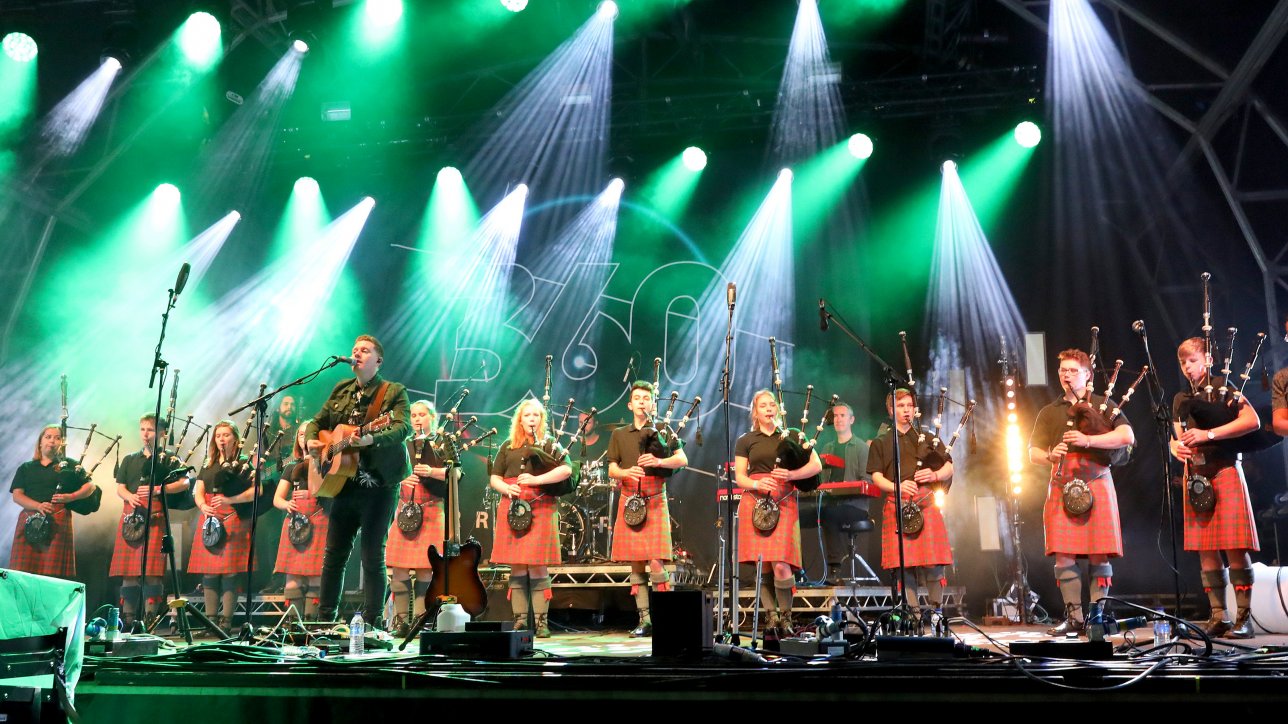 Oban Live, Argyll’s biggest outdoor live music concert, has been hailed a huge success after the two-day event completely sold out on its final and second day.

5,000 unique tickets were sold at this year’s event with attendance figures reaching 8,640, their biggest attendance rate since it began in 2016.

The award-winning cultural party played host to thousands of visitors from all over the world who travelled to Oban to witness an eclectic line-up of incredible ‘Trad’, rock and pop artists in the rural stadium sized setting.

Closing the 2019 concert on Saturday with their phenomenal energetic set were event hosts and international trad-fusion band Skerryvore. Runrig’s Iain Bayne made a guest appearance and back to join them by popular demand were Oban High School Pipe Band. Together they sent goosebumps around the arena with their performance of Skerryvore’s Home to Donegal. They then returned on stage for an epic encore of Skerryvore’s The Rise and Soraidh Slan to close the event in a spectacular fashion complete with LED drum sticks.

Penultimate act The Celtic Brotherhood saw Irish quartet We Banjo 3 and event founders Skerryvore reunite on stage on Friday following their joint North American tour last year. Their entertaining Bagpipes versus Banjos campaign caused a comedy social media storm during their tour together. When the Oban Live audience were asked from the stage by We Banjo 3 which of the two instruments they preferred, it was a clear winner as the whole arena cheered at the mention of bagpipes.

The Caman Connection featured a star-studded line-up of Scottish traditional musicians who have an association with the sport of Shinty. The exclusive Oban Live collaboration showcased the songs, lyrics and melodies that feature or have been inspired by the sport.

Also joining the Saturday line-up were Talisk, Lucy Spraggan and We Banjo 3 who played their only Scottish gig this year at Oban Live.

Kicking off the event each day were winners of the Scottish Sea Farms Oban Live Unsigned competition Argyll Ceilidh Trail who played Friday and Edinburgh rock band DMS who opened the show on Saturday.

Oban Live supported Martyns Monday Club this year, a local organisation that provide mental health support groups in the town. They were raising awareness at the event by handing out wristbands to the audience as well as many of the 2019 artists.

A jam-packed Fringe Programme with live music and special events took place across the town of Oban over the weekend to entertain the thousands of visitors coming for the music concert.

Organisers have thanked their amazing team of crew, volunteers and staff for their hard work and also expressed thanks to their sponsors, partners and the local community for their support to help deliver Argyll’s largest music concert.